Your shopping cart is empty.Found a bug on this website? Have other suggestions? Please let us know by clicking here. 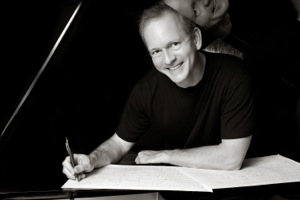 When living in Michigan, he taught at the University of Michigan’s School of Music and collaborated with artists to create multimedia children CD-ROMs for many different publishers, including Disney, Hasbro, Mattel, Scholastic, Crayola, IBM, and Harper Collins. Currently, he and his family reside in Prescott, Arizona, where he composes and runs a private composition and piano teaching studio. As an adjunct professor for Yavapai Community College and a mentor for Prescott College, Henry led college classes in advanced music theory and piano. He and his wife Maria Vomlehn Flurry regularly perform together all across Arizona as the duo Sticks and Tones.

Mr. Flurry composes for solo instruments, chamber ensembles, and orchestra. His works have been commissioned by many individuals and groups, including the Atlanta Wind Symphony, University City Symphony, Kennesaw State University, Yavapai Community College, Prescott Chamber Orchestra, Prescott Chorale, Camerata Singers, and Balance Duo. His orchestral work Fanfare for My City was selected by the Louisiana Philharmonic Orchestra to be their official fanfare. Recent large ensemble works include Canyon Reflections, premiered by the Arizona Philharmonic; Ragtime Dances for Marimba and Orchestra, premiered by Prescott Chamber Orchestra; Impulso: Symphonic Dances for Marimba, Flamenco Guitar and Dancer, a collaboration with Chris Burton-Jacome premiered by the University City Orchestra; 1912, premiered by the Prescott Pops Symphony; and Fragments, a setting of excerpts from the Dead Sea Scrolls for full chorus and percussion premiered by the Yavapai College Master Chorale. His piano concerto Currents was premiered by Steinway Artist James D'León in a concert-long retrospective of Mr. Flurry’s orchestral works presented by Maestro Peter Bay leading the Arizona Philharmonic.

Mr. Flurry is a co-founder of Chaparral Arts, Inc. (a non-profit organization supporting the performing arts in Arizona), Chaparral MusicFest, and the Chaparral MusicFest Suzuki Academy. He has produced seven New Music Arizona concerts, featuring music from living Arizona composers. He has served as a juried composer and performing member of the Arizona Commission on the Arts' Arizona Arts Roster for 12 consecutive years. Yavapai College's invitation for Flurry to organize a concert of his music led to the formation of the Arizona Philharmonic, a professional orchestra designed and supported by four collaborating arts organizations.